Green Light!!
The Department of Education has granted permission for the school to extend the building on the Senior Site. The result of the extension will realise our long held dream to have all the children in our village school located and taught together on the same site. Included in the extension works will be 4 additional classrooms, 2 Learning Support rooms and 2 special classrooms with associated rooms including a large activity room. A Design Team was appointed in December 2022 and plans have been submitted to the Department of Education. Once these plans are approved the school will proceed to the next stage of the building process which will involve appointing the construction company and organising planning permission. 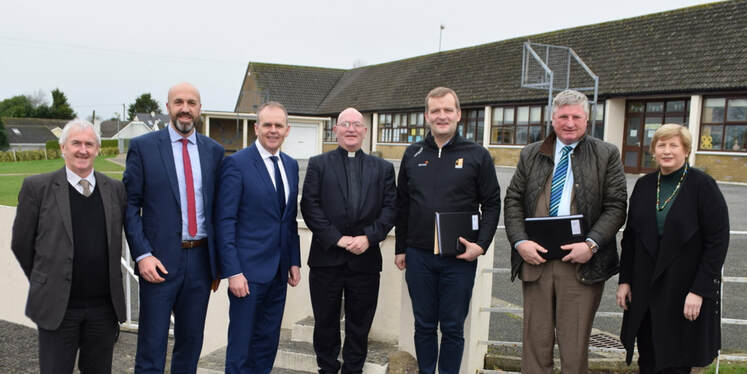 Minister of Education Visits St. Senan's NS
A meeting was held in January 2019 where two points were discussed.
​
The first point was how well the amalgamation of the former Boys and Girls' schools in Kilmacow has gone. It's the 5th year of amalgamation. Feedback from staff, parents and children were presented, they included the benefits of co-ed education, single classes and a greater range of teachers.

The second point that was raised with the Minister was the importance of an extension to the Senior Building. The extension will result in the entire school community being educated together on one site.

From left to right: Cllr. Pat Dunphy, Kieran Walsh - Principal of St. Senans NS, Kilmacow, Minister of Education Joe McHugh, Fr. O'Connor  Chairperson of the Board of Management, John Paul Phelan TD, Minister of state, Bobby Aylward TD and Cllr. Fidelis Doherty.
Prior to September 2014 there were two primary schools in Kilmacow village, St. Joseph's G.N.S. and St. Senan's B.N.S.. In September 2014 the former Girls' and Boys' schools amalgamated to create St. Senan's N.S.. This decision was arrived at following consultation with the teaching staff, parents and patron. There was strong support from all relevant bodies. As a result of the amalgamation, boys and girls are educated together from Junior Infants right up to 6th class. The former Boys' school is currently used as the Junior building whilst the former Girls' school is used as the Senior building.

It is planned to locate the entire school together onto one site and an application has been lodged with the Department of Education to realise this. Following advice from professionals as well as feedback from staff and parents the application was made in October 2018 to extend the Senior building to accommodate all the school children together on one site. We are awaiting a response from the Department and as soon as there are developments we will communicate them.